The Impact of the Metaverse on the Digital Future

While recent years have been marked by many major crises, the fact remains that we have seen some announcements that arouse the curiosity of some and the enthusiasm of others. In October 2021, the boss of Meta, ex Facebook, announced the launch of metaverse, a virtual world. This news continues to flow a lot of ink, as many questions arise about this technology. The latter has become part of our habits through some of the tools we use. The question we are asking ourselves today is its impact on the way we do things in this era where digital dominates all fields. We will try to answer them in this article.

Metaverse: what is it?

If you have read the novel Snow Crash» by Neal Stephenson or seen the film Ready Player One , the metaverse is a technology you can easily understand. It is inspired by science fiction and presented by Marc Zuckerberg as a virtual world where you can do many things in it. In its contracted form, metaverse, “meta” more “universe”, Teaches a fictional, connected and immersive world, where by using a virtual reality headset, and thanks to your 3D avatar, you can live part of your life there.

According to Meta’s boss, this technology will offer its users more social contacts, regardless of their location. They can go to a concert or work meetings, watch a basketball game, go to a fitness class or go to a store to do some shopping. The question related to its impact on the digital future is legitimate. To access it, you need mobile electronic devices such as a virtual reality headset or augmented reality glasses.

Metaverse and the future of online games

The online games industry is one of the first sectors that will be greatly affected by the metaverse in the future. Over the years, we have noticed that the technologies on which it is based have exploded in this industry. We mainly talk about virtual reality, blockchain, artificial intelligence and augmented reality. With their current contribution to the online games industry, we can now imagine the place they occupy in the metaverse. The goal is clearly to allow the user to enjoy terrestrial establishments from the comfort of his home. It is true that it has been done, but in the metaverse the experience will be very different, because it will work directly with his avatar and not simple device controls. To achieve this, the metaverse must, in collaboration with online game publishers, offer a catalog of titles that consider all categories of entertainment options to concern all players.

So Metaverse casino has a game library with slot machines and variants of blackjack, baccarat and roulette, bingo, poker, video poker and more. Unlike today’s virtual casinos that offer the possibility of playing with live dealers from smartphones, metaverse establishments will allow users to interact directly with dealers and other players, often through their avatars. For example, if you are a fan of table games, you can play roulette for French speakers using your virtual headset or connected glasses. Even better, you can win real money and even withdraw your winnings like in a French online casino. This will definitely be done thanks to the blockchain technology that it will be integrated. So cryptocurrencies are very useful. The only question that can be asked is whether the metaverse establishments are controlled by a special institution such as online casinos.

Metaverse and digitalization of companies

Since the advent of new technologies, digitalization has proven to be the main source of business growth. Cost reductions, production and intervention times, better control of data evolution, these are all significant improvements experienced by most companies. The metaverse is presented as a technology that will change the global environment of companies by opening the way to many opportunities while relying on some existing digital tools.

As presented, this technology can be a great asset for companies that want to be closer to their customers or modernize customer relations in all fields. Big brands like Louis Vuitton and Gucci who have held virtual shows in the past are already taking advantage of this. The same is true for the game publisher Epic Games who, in the midst of imprisonment, organized a giant virtual concert through Fortnite. This event was seen by more than 12 million players and was hosted by the famous American rapper Travis Scott. Given the scale that online shopping has gained in recent years, it is clear that commercial brands will also benefit greatly from the metaverse in the future.

Currently, online shopping is done through smartphones and other connected devices. Soon, users of this technology will be able to walk from home, for example to the shelves of supermarkets, shopping carts, and shopping. Payment will be made electronically (with the participation of blockchain)and when it’s done, take them home. For some, we are talking about e-commerce at the moment, but in the coming years, we will be talking about v-commerce. With the metaverse, clothing brands, for example, will give their customers the possibility to consult the characteristics of an item, or even try it from a distance before placing the order. 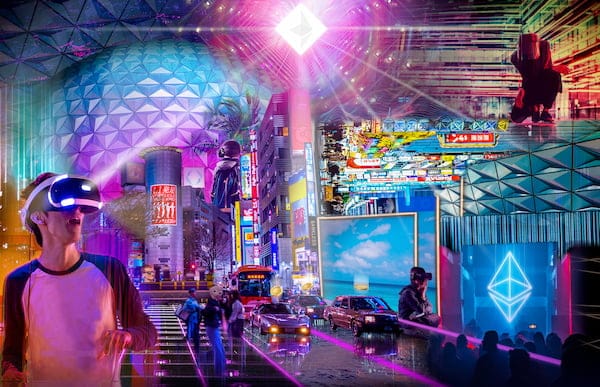 According to the information from the Meta group, the videoconference is called in the future Horizon Workrooms . It is a virtual workspace that allows team members to communicate with each other and make decisions just like during regular meetings. You can easily interact with your colleagues with very realistic avatars. Everyone’s movements, facial expressions and voice sound so authentic that you’d think it was you in person. You can still work on your computer, make projections, go on the net and do research, etc.

Even better, this immersion can be total to the point where the world around you no longer exists. Horizon Workroomsthen reveals itself as the solution to some existing problems. For example, for a normal videoconference, the user must lock himself in a remote place and must speak by bringing the microphone closer and finding the right angle for the camera. On the other hand, with Horizon Workrooms, there is no need to worry about all its aspects. All users have to do is put on their VR headset or smart glasses and you’re done.

However, to access the application Horizon Workrooms , users must have a Facebook account. This still happens through VR headsets and not phones. Note that, earlier before the announcement of the metaverse project by Marc Zuckerberg, Microsoft had already focused on a similar technology focused only on professional use. It is called ” Mesh for Teamsand will be a combination of its Teams software with the virtual functions of mesh. It will also replace traditional meeting rooms with purely virtual spaces where, among colleagues, you can talk to each other without being in the same physical space. LikeHorizon Workroomsyou can access collaboration tools like screen sharing or a whiteboard.

Impact of the metaverse on the education sector

Today, it is indisputable to say that the main new technologies of Virtual Reality, Augmented Reality and Artificial Intelligence have a strong impact on the education sector, especially training and skill development. Whatever they are, each of them brings a little something more to this sector that is becoming increasingly digital. From this point, we can imagine that the metaverse will go further by providing cutting-edge education, because some complex subjects require the use of technology. Users can actually take advantage of the metaverse to learn more quickly, but above all to increase the memorization of information.

On the part of the learner, for example, thanks to the metaverse, they can learn more about very technical subjects, simulate scenarios or go back to an old time. They can even attend class with classmates and work together to solve the given problems. The possibility of going to consult libraries or other places of learning is also offered to them thanks to metaverses. As for trainers, metaverse will allow them to manage courses with students without physical contact.

Teachers also have the opportunity to chat with their students and fully engage with them. With all this speculation about the metaverse, it is safe to say that this technology has an exciting future in store for us where education and all other sectors where it has an impact will see a radical change. , which can benefit the world population. .. The question floating on the lips of some Metaverse users is whether it affects mental health.

Is the metaverse dangerous for mental health?

Right now, it’s a bit premature to say that the metaverse is dangerous for mental health, because we haven’t experienced it yet. However, based on what already exists, including social networks and virtual reality, we can say that this technology is likely to create addiction problems for users. In addition, a study conducted byRoyal Society for Public Health (RSPH)has shown in the past that depression and anxiety have increased by 70% in the 14-24 age group since the advent of social networks. Based on such figures, at least we can say that the implementation of this technology in the future must be followed by safeguards to control its use.