Despite the market decline caused by FTX, from which most cryptocurrencies have yet to recover, Litecoin has erased all gains and is now sitting almost 40% above the lows of the first half of November. :

On December 1, 2022, Litecoin declared itself “the fastest growing cryptocurrency payment method in the world”. On November 30, US transfer giant Money Gram enabled the sale of three cryptocurrencies on its mobile app, including Litecoin. Litecoin was also integrated with Google Cloud and Block Bank in November.

Litecoin is the second oldest cryptocurrency. It was created by former Google engineer Charlie Lee in 2011 based on Bitcoin’s open source code. The developers continue to develop the project. In May 2022, Litecoin completed the privacy-focused Mimblewimble Extension Blocks (MWEB) update to enable confidential transactions. This feature of Litecoin is still in development. During the last bull market, the cryptocurrency hit around $390 and is still nearly 80% below its all-time high. 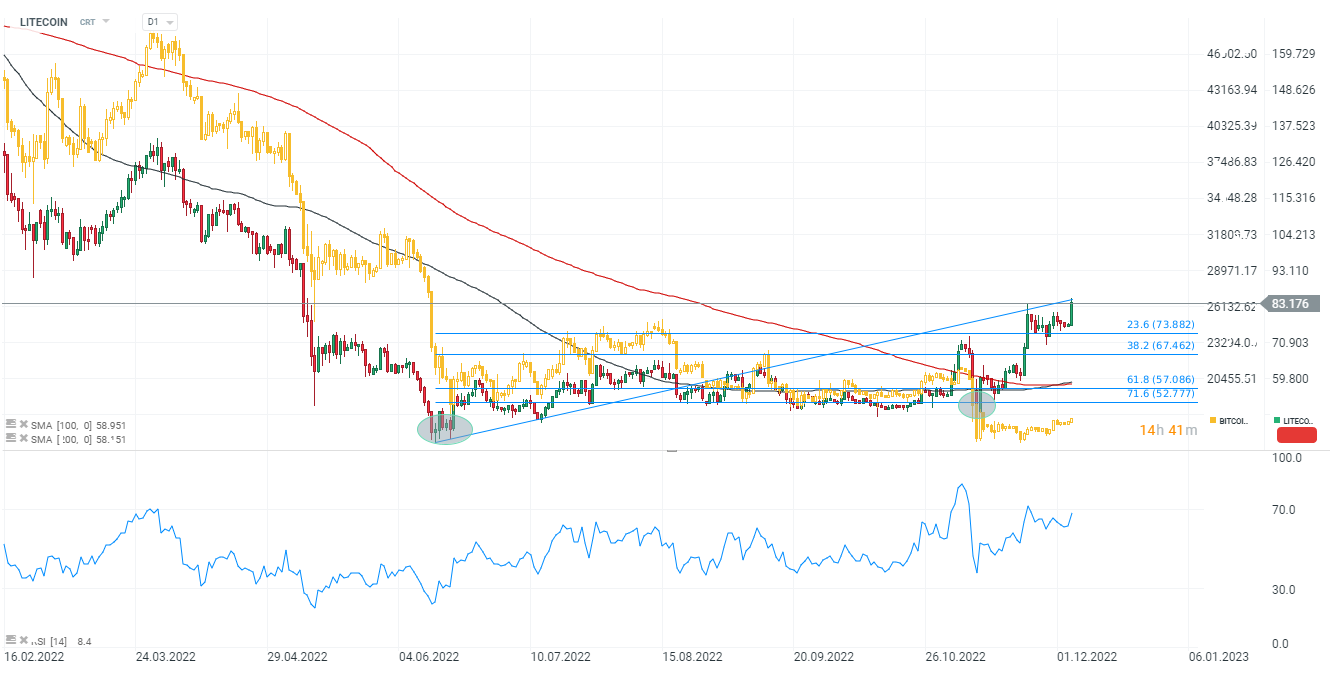 Litecoin chart, D1 interval. The cryptocurrency reached the levels last seen in April this year, and we can see that after the collapse of FTX, it is better than Bitcoin (yellow chart). Looking at the 100 and 200 session averages, we can see that a new strong “golden cross” has occurred, signaling a lasting change in trend. Looking at the formation formed by the LTC in 2022, we can also notice a similarity with the so-called saucer formation. The closest potential support level is the 23.6% Fibonacci retracement near $73. Source: xStation5

“This material is marketing communication within the meaning of Art. 24(3) of Directive 2014/65/EU of the European Parliament and of the Council of 15 May 2014 on the markets of financial instruments and amending the Directive 2002/92/EC and Directive 2011/61/EU (MiFID II) The marketing communication is not an investment recommendation or information recommending or proposing an investment strategy within the meaning of Regulation (EU) No. 596/2014 of the European Parliament and the Council on 16 April 2014 on market abuse (Market Abuse Regulation) and repealing Directive 2003/6 / EC of the European Parliament and the Council and Directives 2003/124 / EC, 2003/125 / EC and 2004/72 / EC of the Commission and Commission Delegated Regulation (EU) 2016/958 of 9 March 2016 supplementing Regulation (EU) No 596/2014 of the European Parliament and the Council regarding standards regulatory techniques related to technical modalities in objective presentation in r investment recommendations or other information that recommends or suggests an investment strategy and for the disclosure of special interests or indications of conflicts of interest or any other advice, including in the field of investment advice , in the meaning of the law of 29 July 2005 on trading in financial instruments. (ie Journal of Laws 2019, item 875, as amended). All information, analysis and training provided are provided for informational purposes only and should not be construed as advice, recommendations, investment solicitations or invitations to buy or sell financial products. XTB cannot be held responsible for its use and the resulting consequences, the final investor remains the sole decision maker regarding the position taken in his XTB trading account. Any use of the information mentioned, and in this regard any decision made in relation to a possible purchase or sale of CFDs, is the sole responsibility of the final investor. Copying or distributing all or part of this information for commercial or private purposes is strictly prohibited. Past performance is not necessarily indicative of future results, and anyone acting on this information does so at their own risk. CFDs are complex instruments and have a high risk of losing capital quickly due to leverage. 82% of retail investor accounts lose money when trading CFDs with this provider. You need to make sure you understand how CFDs work and be able to take the potential risk of losing your money. With a Limited Risk Account, the risk of loss is limited to the capital invested.